For an outdoor halfpipe, I highly recommend skatelite, however, this stuff is very expensive, around $150 per sheet. Go to www.skatelite.com to start researching how to get this stuff.

I talk about alternatives to skatelite in the General Building Tips section, be sure to read this page.

I'll walk you through how we layed the sheets, but it really doesn't matter that much as long as you cover the whole pipe. We used sheets of skatelite that wern't exactly 4' by 8', which they usually come in (we got these sheets cheaper since they were irregular). So again just figure out an efficient way that you will be able to cover the whole surface with the skatelite.

First lay the first sheet of skatelite the long way on the flat bottom. 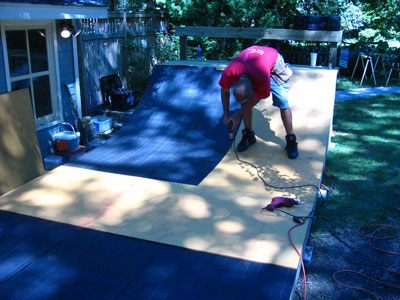 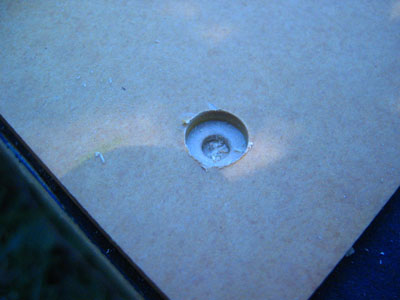 Place in the next sheet of skatelite. 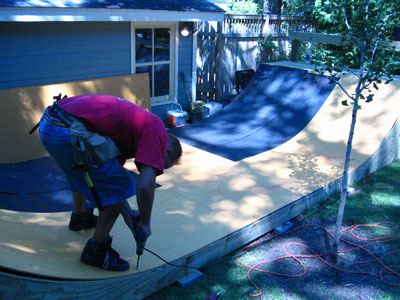 We cut the next sheet of skatelite to be less wide, so that the surface would look symetrical, this had no structual purpose, just makes it look better. 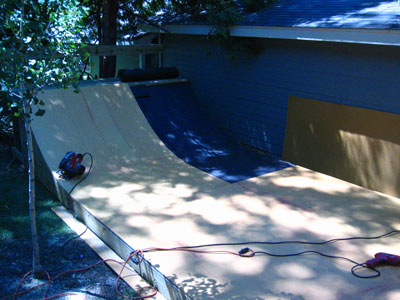 Finish putting all the skatelite on to cover the entire surface 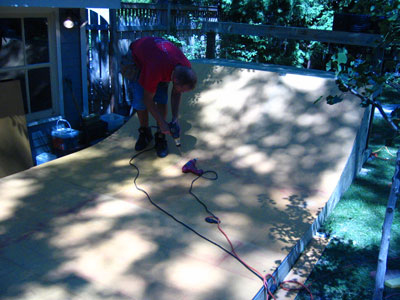 Once you have all your skatelite layed in place, you want each piece to have a lot of screws. Use chalk and sting to mark where your 2x6 supports are, then put a screw about every foot into each piece of skatelite on each 2x6 support. This will take a lot of screws (each sheet will have about 12 2x6s under it, and you should put about 5 screws across each 2x6, so that makes for about 60 screws per sheet), since you need to predrill for each screw, this will take a lot of time.

You can see the chalk lines we drew in the picture below, also notice we put a lot of screws along the part of the skatelite that will be next to the coping.

Now cut off the excess skatelite sticking off the top of the ramp, so that the coping will fit in snugly. 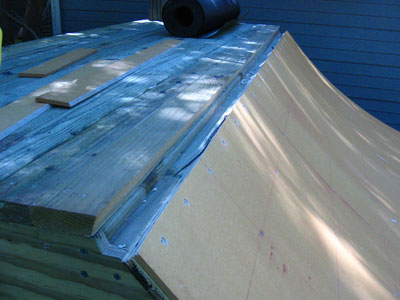