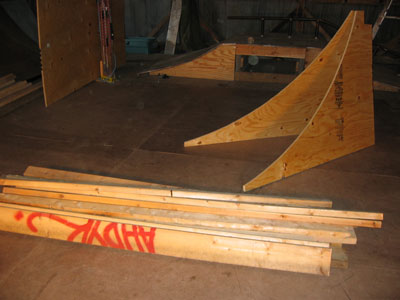 Now the whole quarterpipe is going to be 8' wide, so you need to cut each of the 2x4's and 2x6's to be 94.5", so that each piece plus two widths of the 3/4" plywood will add to 8 feet. Next, before screwing anything together, lay the two sides on top of each other and make marks where you want to screw in each 2x4 (it is easier to do this now than when they are separated by 8'). You should put a 2x4 about every 10 inches. In total my quarterpipe has nine 2x4's along the transition, so just try to evenly space them out. Once you have your marks on where the 2x4's should go just start screwing them in like in this picture. 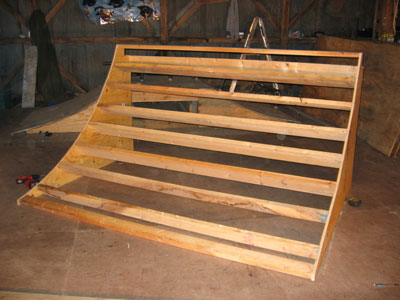 Note that the bottom 2x4 goes horizontal and the rest go vertically, perpendicular to the transition. In the picture I have the top 2x4 perpendicular to the transition, but after building the quarterpipe I recommend putting this piece parallel like the bottom one. The reason for this is when you screw in the plywood you start from the top and it will be much easier to screw it into the 2x4 if it is parallel to the transition. Next take the three 2x6's and screw them into the back. Put one at the bottom corner, then the other two along the 90 degree cuts that you made in the sides. One of the lengths is 5.5 inches (a 2x6 is actually 1.5 by 5.5 so a 2x6 should fit perfectly in this spot).

Go on to Step 3: Buid the Platform